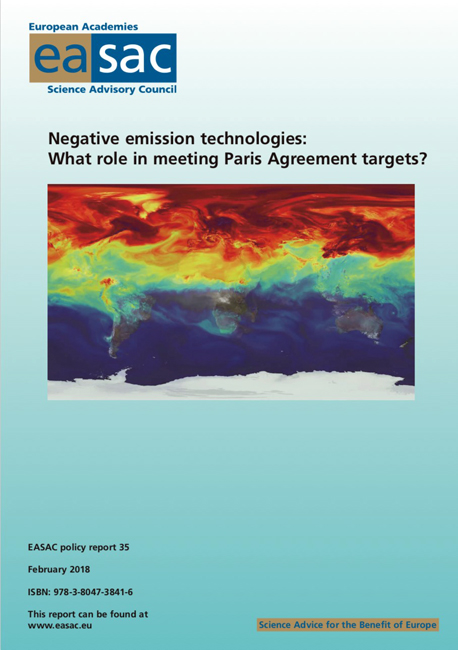 In a new report by the European Academies’ Science Advisory Council (EASAC), senior scientists from across Europe have evaluated the potential contribution of negative emission technologies (NETs) to allow humanity to meet the Paris Agreement’s targets of avoiding dangerous climate change. They find that NETs have “limited realistic potential” to halt increases in the concentration of greenhouse gases in the atmosphere at the scale envisioned in the Intergovernmental Panel on Climate Change (IPCC) scenarios. This new report finds that none of the NETs has the potential to deliver carbon removals at the gigaton (Gt) scale and at the rate of deployment envisaged by the IPCC, including reforestation, afforestation, carbon-friendly agriculture, bioenergy with carbon capture and storage (BECCs), enhanced weathering, ocean fertilisation, or direct air capture and carbon storage (DACCs).
“Scenarios and projections that suggest that NETs’ future contribution to CO2 removal will allow Paris targets to be met appear optimistic on the basis of current knowledge and should not form the basis of developing, analysing, and comparing scenarios of longer-term energy pathways for the EU. Relying on NETs to compensate for failures to adequately mitigate emissions may have serious implications for future generations," state the European science academies. back to overview