For historical reasons related to migration flows, Francophone culture is particularly present in the Eastern Republic of Uruguay - since 2012, this country has been a member of the International Organisation of La Francophonie (Organisation Internationale de la Francophonie). The special proximity between France and Uruguay is at the core of the scientific cooperation agreement that the Academies of science of the two countries have settled on in 2014. In December 2014, Jean-François Bach and Catherine Bréchignac, the Perpetual Secretaries of the Académie des Sciences, have taken part to the French-Uruguayan Sciences, Technologies, Education for a Sustainable Development seminar that took place in Montevideo on the occasion of the Week of the Committee of the Institut Pasteur of Montevideo. 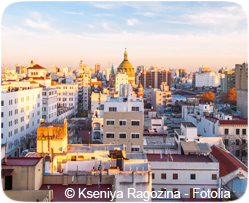 In December 2014, the French and Argentinian academies of science, which signed their first cooperation agreement in 2004, gathered in Buenos Aires and settled on a new agreement before a colloquium on immunology was held, to which a delegation of members of the Académie took part, led by Jean-François Bach.