Thanks to the initiatives of rapprochement they have taken in the last decades and to the many cooperation projects on which French and German partners are successfully working, France and Germany share particularly tight links with one another. 2013 was marked by the 50th anniversary of the Traité de l'Elysée [Elysée Treaty]: on 22 January 1963, General de Gaulle and Chancellor Adenauer signed this treaty of cooperation, designed to seal the reconciliation between France and the Federal Republic of Germany. 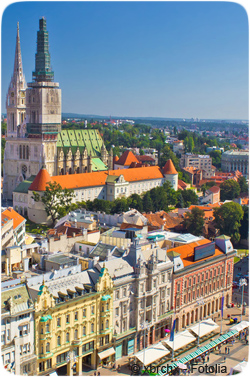 The Académie des Sciences hosted the physics class of the Swedish Academy of Science from 19 to 21 November 2013: it organized for the class a tour of prestigious laboratories in the region Île-de-France and meetings with physicist members of the Académie on the theme of energy. The Académie also greeted a delegation of members of the Young Academy of Sweden on 17 March 2014.

In line with the interacademic meeting the Académie in 2012 had organized in 2012 with the Croatian Academy of Sciences and Arts, its Perpetual Secretary Catherine Bréchignac took part in the symposium held on Nicola Tesla's scientific and technological legacy on 17 December 2013 in Zagreb. This meeting was an opportunity to discuss the challenges of research in Croatia, on the eve of its integration into the European Union.

The Board of the Académie moreover hosted the presidents of the Royal Society, Sir Paul Nurse, on 5 June 2014, and of the Russian Academy of Sciences, Vladimir Fortov, on 22 October 2014.

On 15 April 2014, at the invitation of HE Alain Le Roy, the Ambassador of France in Italy, of Jean-François Bach, the Secrétaire perpétuel [Perpetual Secretary] of the Académie des Sciences, and of Lamberto Maffei, the President of the Accademia Nazionale dei Lincei, the members of the Académie Jean-Pierre Changeux and Salvatore Califano have present a conference on Neurosciences et art at the Palazzo Farnese in Rome.